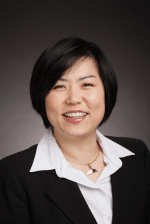 Christine Kim was born in Seoul, Korea and came to the U.S.A. in 1986. Christine later studied at and graduated from Yonsei University in Seoul, Korea and worked for LG Corporation also in Seoul, Korea. Christine returned to the Northwest and began her legal career at Buckley and Associates in 1999 as a case manager, and later a legal assistant. Inspired by her mentor, Mr. James Buckley, giving voice to individuals that could not be ignored in their fights against the insurance industries, Christine followed in Mr. Buckley’s footsteps and earned her Juris Doctorate degree from the University of Oregon School of Law. While in law school, she served as a senior editor for the Oregon Review of International Law, a member of the Moot Court Board, and a judicial extern for the Honorable John V. Acosta, United States District Court, District of Oregon.

Christine returned to Buckley & Associates as a litigation attorney handling personal injury claims fighting insurance companies that are reluctant to fairly compensate those that are hurt through no fault of their own. Christine takes a great pride in being able to connect with and advocate for her clients, particularly based on her own experience of having difficulty communicating when she first came to the United States and could not speak English. Her recent accomplishments include forcing an insurance company to pay over $40,000 extra in addition to the jury verdict when the insurance company lost at the arbitration, refused to pay the arbitration award, and made her client proceed to trial. Christine was recently awarded Attorney of the Year by Buckley & Associates.

Outside the office, Christine can be found on the sidelines cheering as loud as she can for her daughter’s volleyball team. Christine also enjoys good food and good company, although nothing can beat food prepared by her amazing mother whom Christine cannot thank enough for all her mother has done for her family. “Well, my father is not so bad, either,” Christine adds with a smile.